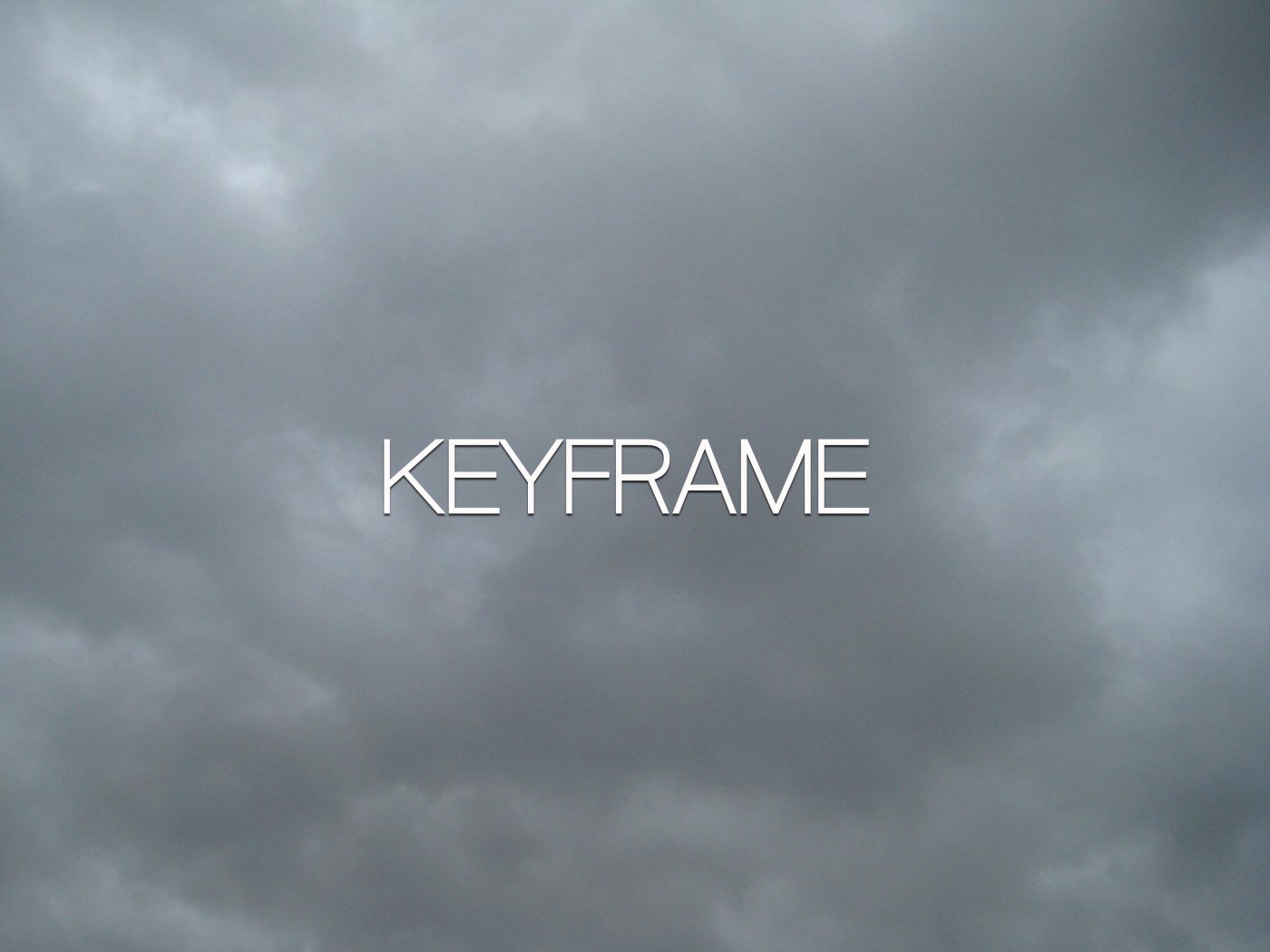 [KEYFRAME] n. a moment that seemed innocuous at the time but ended up marking a diversion into a strange new era of your life – set in motion not by a series of jolting epiphanies but by tiny imperceptible differences between one ordinary day and the next, until entire years of your memory can be compressed into a handful of indelible images – which prevents you from rewinding the past, but allows you to move forward without endless buffering 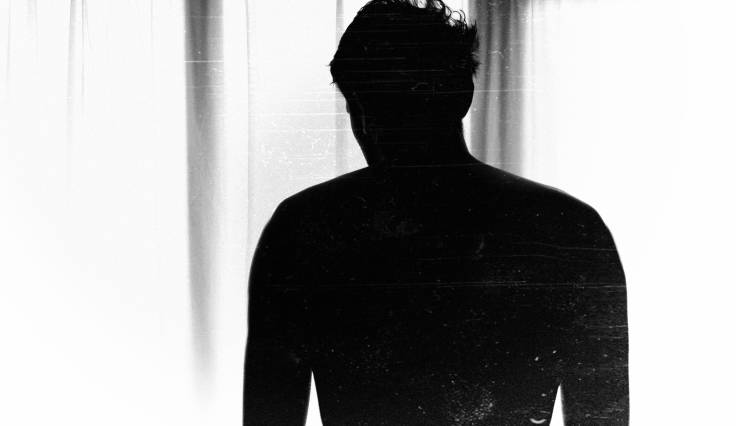 It was raining at the seaside. He found the apartment with little trouble and a polite amount of conversation with the landlord. Keys were exchanged, electricity points highlighted. As soon as the owner left, he turned all the radiators fully up, and visited each window, and walked along with an open palm outstretched. The hairs on the backs of his hands strained to feel a draft, and happily none could be found. The soft crevices of his palm brought up little lines of sweat as he reached the part of arrival during which he would usually smoke. Instead he drew the curtain over the balcony-leading door. It wasn’t really an unpacking sort of visit, so he simply put his case on the dining table. He would eat only at the kitchen bar; it seemed as good a place as any. Now to wait for the room to warm.

Martin went to the bathroom to look at himself in the mirror. The flight had changed him slightly: the sour areas under his eyes puckered just a little more, some veins more present than before, but in all he wasn’t drastically worse, and this brought him relief. He had surrendered to the inevitable and had begun shaving his head some months prior; the shape of his skull still made him pause, even now. He washed his hands as something to do, groping for a towel that wasn’t present. A couple of vigorous shakes and back to look at the offering.

It seemed like too much room just for him, and yet he experienced a frisson of pleasure – to think this was all his, for two nights only, but still. The shortness of the stay was the reason he would not spend time unpacking. Apart from the file, which he now eased out from the bottom of his case, dislodging balled socks and rolled pants. He held it squarely, securing its weight with thumb and little finger respectively, and walked back to the low table in the centre of the living area. As he travelled, he pressed the cardboard to feel the burn of blood visiting new skin, where his fingernails used to end. It wasn’t an unpleasant feeling.

The bedroom boasted a double bed – it turned out to be two singles. They were not secure, which he tested by shuffling through the midsection, feeling a little like a knife through a butter dish.

Returning to the main space, Martin both felt and smelled the pocket of warm air from the heating – hot wet metal. He remembered old gas heaters, and how he would place spit balls on them to watch them sizzle. For a moment he forgot where the file was, and almost in the same instant located it on the table.

The toilet was to be found just off the porch – with its own climate of cold wet air. He opened the front door again and peered out over the balcony at the small town, guarded on all sides by sand dunes and foliage. It was only 3pm and the sun was setting. Then a wave of anxiety hit Martin, and he shut the front door. He backtracked to the living area, taking a seat in front of the file. Finally, it was time to open it, and of course he started with the first page.

Martin had to take the bus. Technology had advanced in such a fashion that he could easily locate the route on his mobile, and so no more than ten minutes after leaving the house, he was trundling along in what was assuredly the right direction. Around the fourth stop (he had 11 in total), a woman boarded, with two dogs.

He saw in her face the very familiar Nordic accents – the conversation between blue eyes and dainty forehead – and continued to stare nonplussed as she spoke to him in Dutch. He imagined engaging in intercourse with her, and idly wondered if the dogs would watch him then as they did now. The lady realised he didn’t understand, and switched to English:

“Are you on holiday here?” she asked.

This felt like too much information, so he did the thing he liked to do at work when he felt a caller had too much control, and asked: “Why are you here?”

Ann-Sophie had lived in the area for more than ten years. Originally from Finland, “not that you’d be able to tell – my accent went out when I accepted I’d have to learn the Dutch way!” she and her dogs had moved over during a brief break from her then-husband. This turned out to be total separation, and so they stayed by the sea. He found it increasingly difficult to return her gaze, and had to look out of the window. Rolling countryside, punctuated by the occasional cow, passed briskly. He was nine stops down.

“I suppose I must,” she replied. She seemed about to reattempt her line in questioning, so Martin got off the bus.

Martin did not love his job, but it had suited him well. Each morning he made a builder’s tea, agonised lightly over the biscuit selection, and logged in to the system at approximately 09:05. The generic tone he adopted whilst customer complaints flew in, thick and fast, was as neutral as it was effective. He made sure to never raise his tone above a polite mumble, and always wished the caller a pleasant day. He liked to think his emails could be read in exactly the same tone: calm, controlled, and just the right amount of understanding. To friends, he would speak of the people he got to meet – new voices from all walks of life. On the rare occasion that a customer showed the whites of their eyes, got really nasty, so to speak, he kept a level head throughout. Martin certainly did not take his work home with him. When he popped his mug in the dishwasher, deposited any wrappers in the correct bin, and turned off his computer, he also deprogrammed – so that by the time he strode through the swing doors of the atrium, he was simply headed for home.

There was just this one – this one guy. A very angry character, with a tireless ethic when it came to pursuing a complaint. First a call – and as some dogs dislike one another immediately – Martin’s tone seemed to rub the wronged party entirely the wrong way. The customer moved to prose shortly after, and clearly felt that his issue was mishandled. Despite using different addresses as Martin deftly blocked the previous; they were always identifiable by the wording they used in the subject lines of their attacks: You are not human, You do not deserve to breathe oxygen, Scum scum scum, Die in a ditch. This person was relentless. It took four months, three days, and seven minutes for Martin to take action.

The database existed for the logging of interactions between customer and representative – a dated, clunky programme into which employees could input important information, and from which employers could calculate effectivity for their quarterly reports. Extracting the data was strictly forbidden. Having cross-referenced and selected Name; Address; Phone number, Martin hovered over the ‘Print’ button. His fingers kestrelling, he glanced over his left shoulder to the opening of his booth. He took a half-breath, and pressed down.

That was the moment when things changed quite, quite permanently.

The file was a work of dedication. The craft involved spoke through careful inclusion of a contents page. Any reader would raise an impressed eyebrow to see how Martin had collated his information. He also wanted them to witness how many, many pages there were on the activities of the customer. Like a virus, this person was truly alive on the web: using all eight legs to poke, prod and cut anyone he encountered. Martin had been able to witness live chatroom bombardments as one views the siege of a city on TV: he wanted to reach and touch every single victim, and was sickened by his inability to do so. This compendium had begun as a therapeutic exercise and, he hoped, something solid to take to the authorities. Somewhere, within his careful colour-coding and ordering, Martin realised that the file had become a memento mori. It would be what people looked at when they tried to understand.

As often happens, the route planner had overestimated how long it would take him to navigate from his premature departure from the bus, to the doorstep. This was a good thing: a longer walk could have put him off his task entirely. Martin still paused before crossing the road. The house was a bungalow, and had a rather gaudy statue: a bald eagle mid-takeoff on the front lawn, which was gravelled. He thought he could see someone shuffling inside. It was time to move.

His accounts were up to date. Not a hair out of place – if his replacement had more than two braincells to rub together, they would not struggle to pick up from where Martin had left off. He did feel a slight amount of guilt at not announcing his departure formally – everyone thought he was just on a trip, if they thought about it at all. He had considered acquiring a firearm, but the lengthy process involved would only gain him an air rifle, at best. He had balked at the bureaucracy, and anyway (words from the emails flashing in his mind, the caller’s nasal rage stoppering his ears) a knife was better. Mess was appropriate. Agony was fitting.

That the face that owned the name was young did not matter now. The eyes matched the writing – shrew-like and calculating, preloaded with scorn. Martin used the first thrust of the blade to guide him inside, making sure to close the door behind him as he did, to keep the draft at bay.